VPN from Peplink behind Cellular NAT to Home on dynamic IP

Hello all! I’m currently running a Cradlepoint IBR 1700 and having no end of firmware problems that they seem unable to fix, so I’m looking at switching to a Peplink device, likely a BR1 Pro.

One thing that appears to be missing on the Peplink device is an openVPN client. The router is on our boat, on which we switch back and forth between several SIM cards from the standard providers, running heavy NAT and no static IP. I’ve been using OpenVPN to connect to my on-land home network, which is on Comcast with a dynamic IP (through a dynamic dns service to map to a hostname as it changes), and it’s been working great for a year now. I’d like to be able to do the same with the Peplink in some capacity. All of the OUTGOING VPN from the Peplink appears to unfortunately require site-to-site, with a static IP on the boat side, which is never going to happen. Is there some other solution that I’m not seeing in the spec pages that would let me do this? I’m running a Linux-based NAS at home to host the VPN, so I can set up a variety of different VPN options, depending on what I might be able to cajole the Peplink into doing.

Hey Welcome to the forum!

All peplink devices can make use of a free FusionHub Solo license. Fusionhub is a custom virtual machine that acts as a PepVPN endpoint. Depending on which NAS you have, you can either run it as a VM on your home NAS - so you won’t need OpenVPN at all, or you could run it in the cloud ($5/month on Vultr.com) and get your home router to create a IPSEC / Openvpn connection to the Fusionhub too.

I made a video here about getting a BR1 and Fusionhub working together. 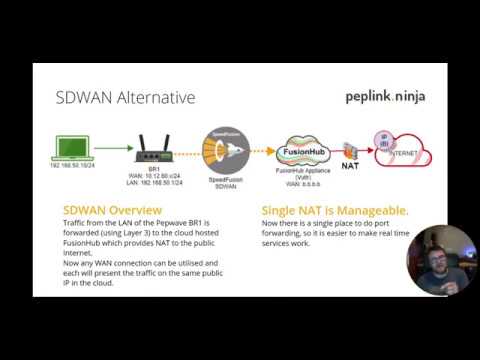 Thanks for the reply! Unfortunately my NAS is ARM-based, and the fusionhub solo images seem to only run on x86-based platforms.

I’d rather not deal with a cloud service just to host a VPN that should really be available on-device. Are there any other options for remote behind-firewall VPN available with the peplink devices?

Are there any other options for remote behind-firewall VPN available with the peplink devices?

I see. At the moment its just IPSEC as an alternative to Peplinks own PepVPN.